We have developed the Big Bubble Curtain for compressed air sound mitigation. The system was designed according to requirements. With funding from the Federal Ministry for the Environment, Nature Conservation, Building and Nuclear Safety (BMUB), and is now classified as “State of the Art”. It is mainly used for noise protection during offshore pile driving and offshore munitions detonation. In particular, harbor porpoises and seals that use ultrasound for orientation in the water are protected by the compressed air hydro sound attenuation. In the German waters of the North and Baltic Seas, the BMUB limit of 160 dB sound exposure level (SEL) applies, measured at a distance of 750 m from the sound source. 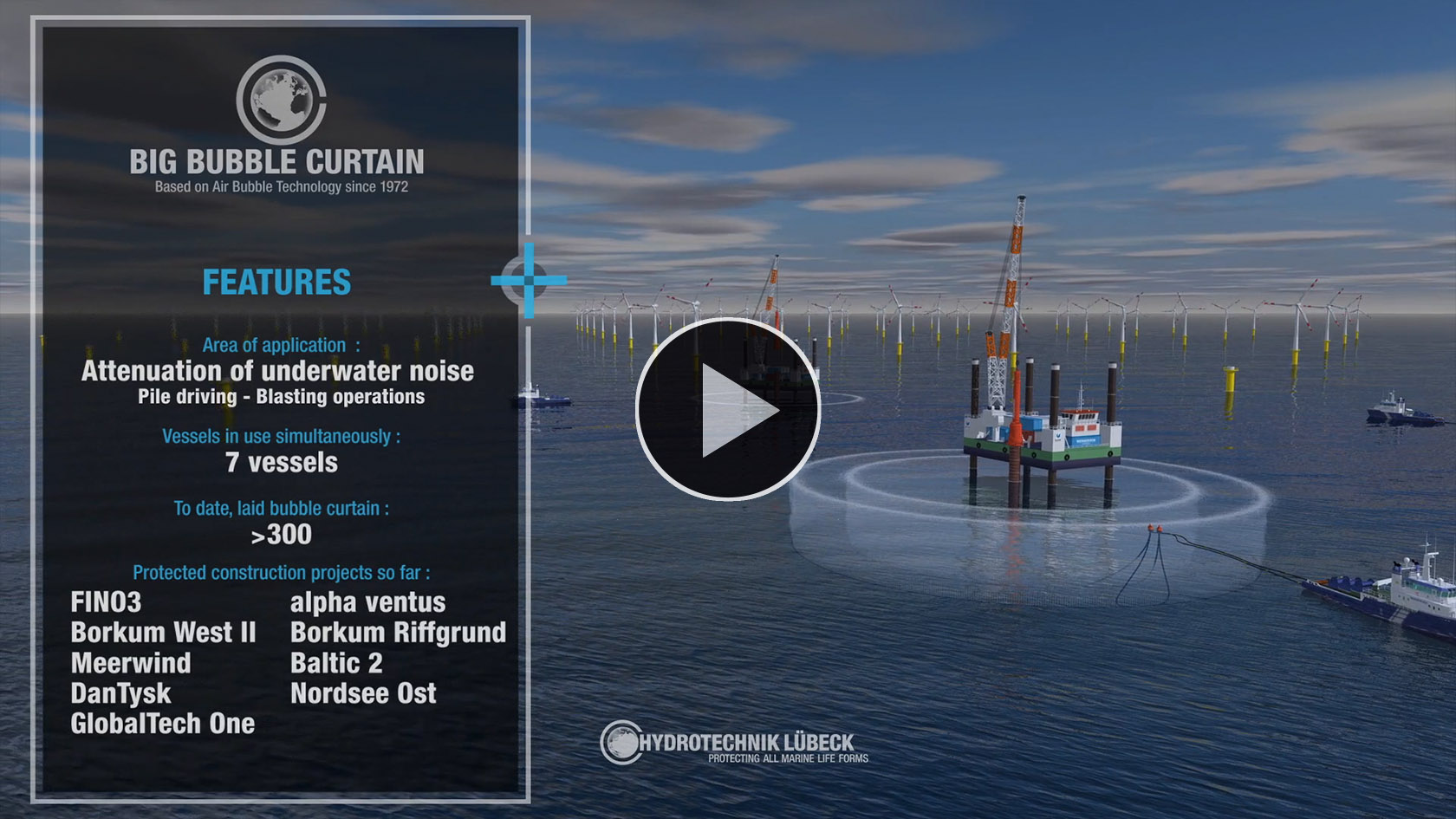 A flexible hose system with special nozzle openings is used. It is laid at a sufficient distance around the location of the sound generation on the seabed. Depending on the nature of the sea bed and the water current, up to two hose rings can be used. A ship equipped with special compressors is connected to the hose system and presses air into the hose system with up to 10 bar while the sound is generated. Make sure that no oil gets into the water via the compressed air. The compressed air escapes through the nozzles provided. The steadily rising air bubbles create a bubble veil. It changes the physical properties of the water. Sound waves are broken several times, reducing the volume by up to 95%.

The Big Bubble Curtain is flexible and independent

The hose system is recovered after each use with the help of specially developed hose winches. The Big Bubble Curtain is independent of other trades and does not leave any traces on the water’s bottom.
The maximum sound attenuation that has been achieved so far is 15 dB with one hose ring and 18 dB with two hose rings. The deployment and use of the Big Bubble Curtain depend in different ways on wind strength, wave height, water depth, current, and the environmental conditions of the respective construction site.

The Big Bubble Curtain has its origins in the technology of compressed air barriers, which Hydrotechnik Lübeck has been using for more than 50 years to protect against floating debris and oil. At the suggestion of NABU Schleswig-Holstein and various environmental associations, tests were initially carried out in 2006 to determine whether the compressed air barrier system could also be used to minimize hydro noise. Ammunition from the Second World War was to be blown up in the Kiel Fjord. A nearby harbor porpoise sanctuary was in acute danger.

In 2008, the system was used for the first time in the offshore area of ​​the North Sea for pile driving to set up the research platform FINO 3. The BMUB contributed significantly to the costs of scientific research and further development. The University of Hanover and the companies BioConsult, itap GmbH were also involved.

The Big Bubble Curtain is now used worldwide and for construction work in almost all offshore wind farms and for blasting work in the North and Baltic Seas. 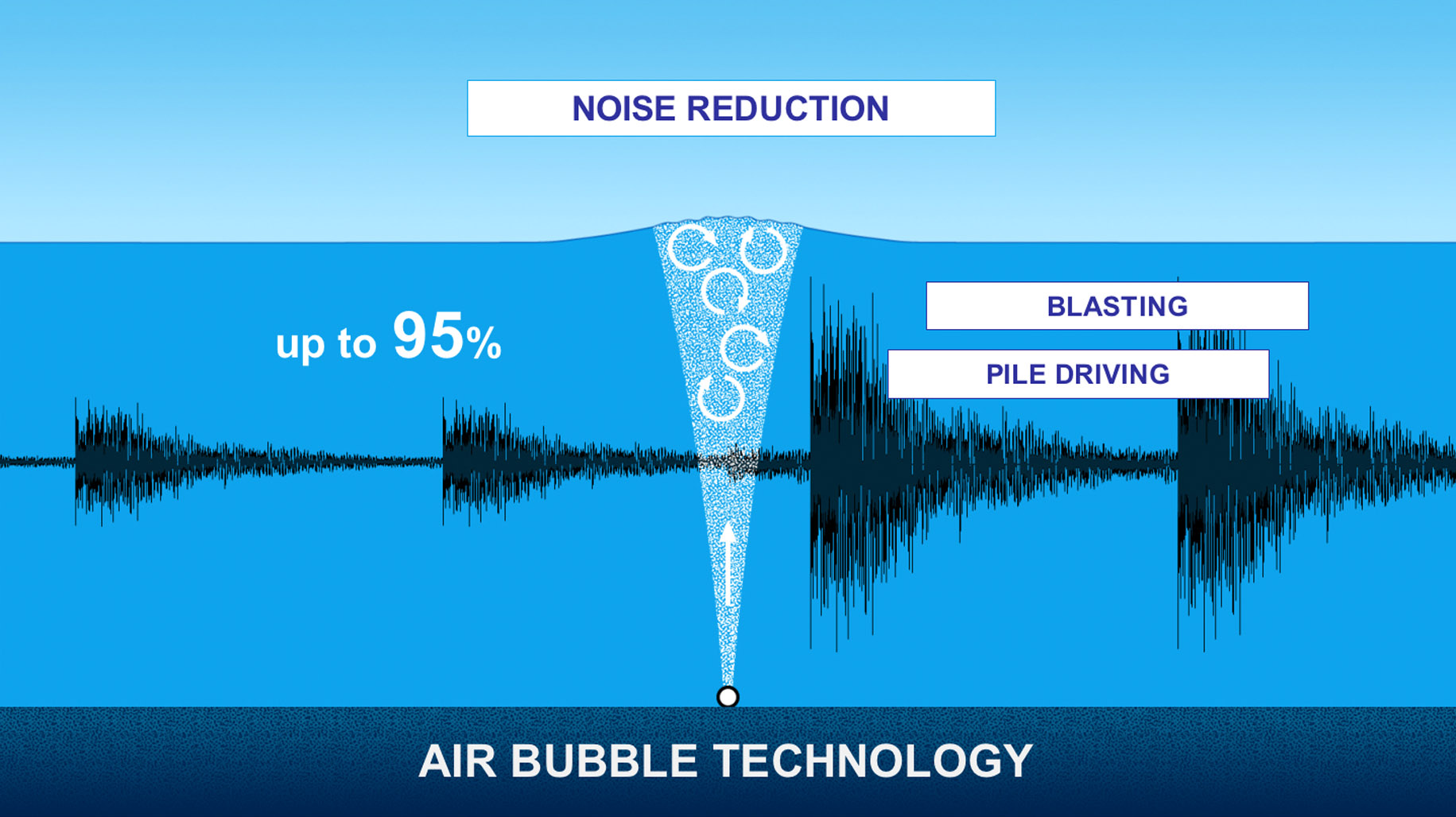 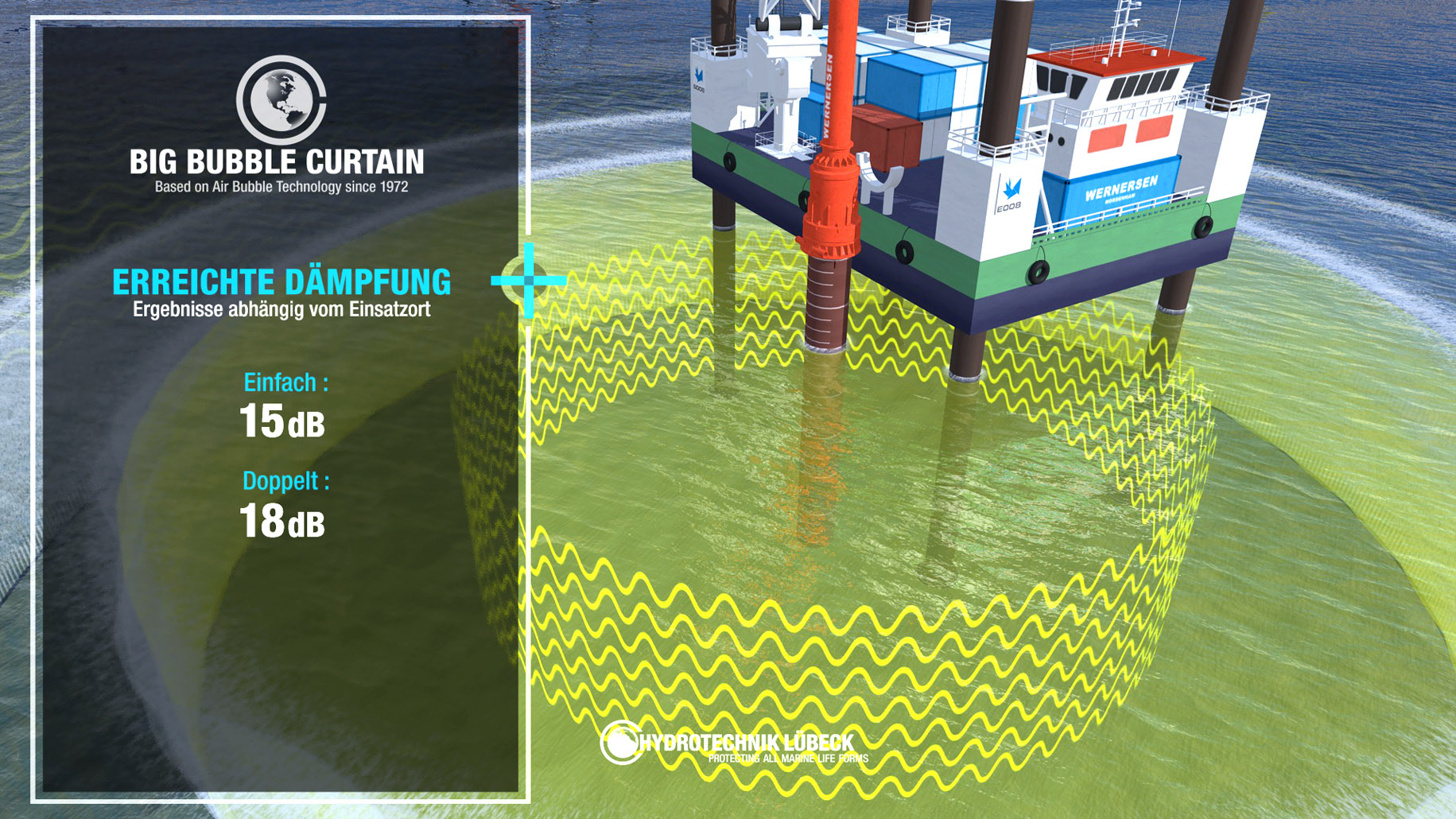 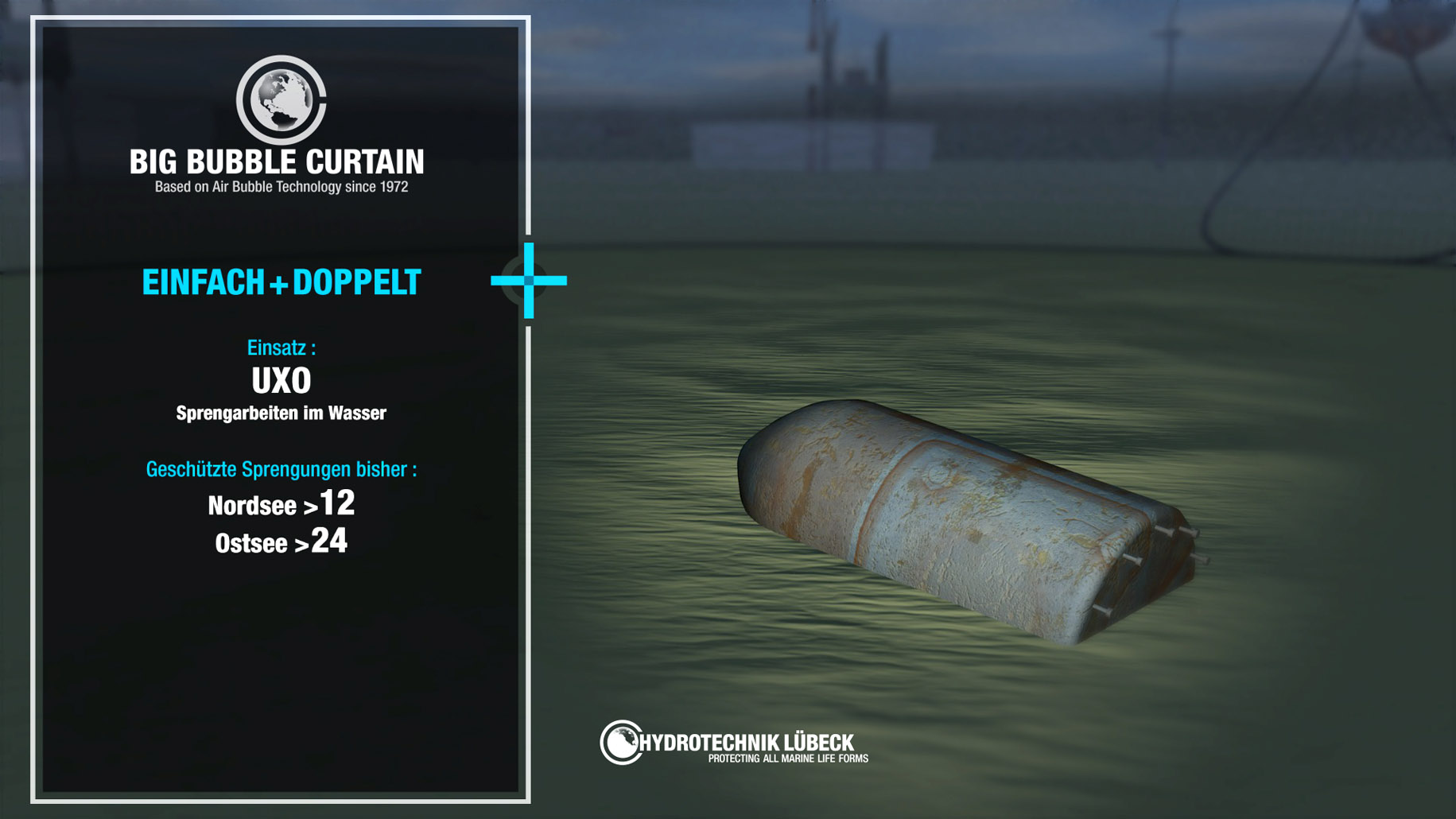 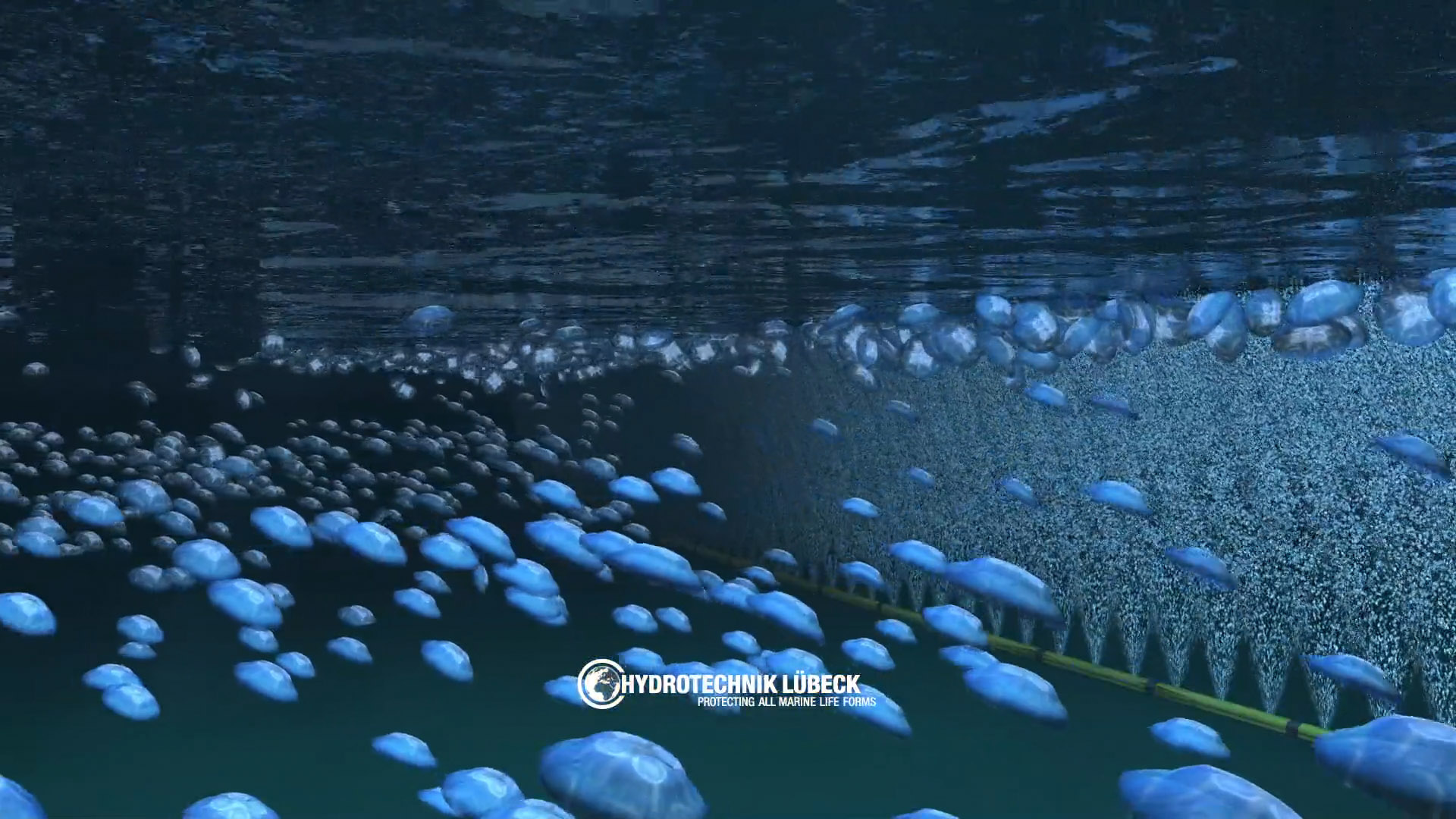 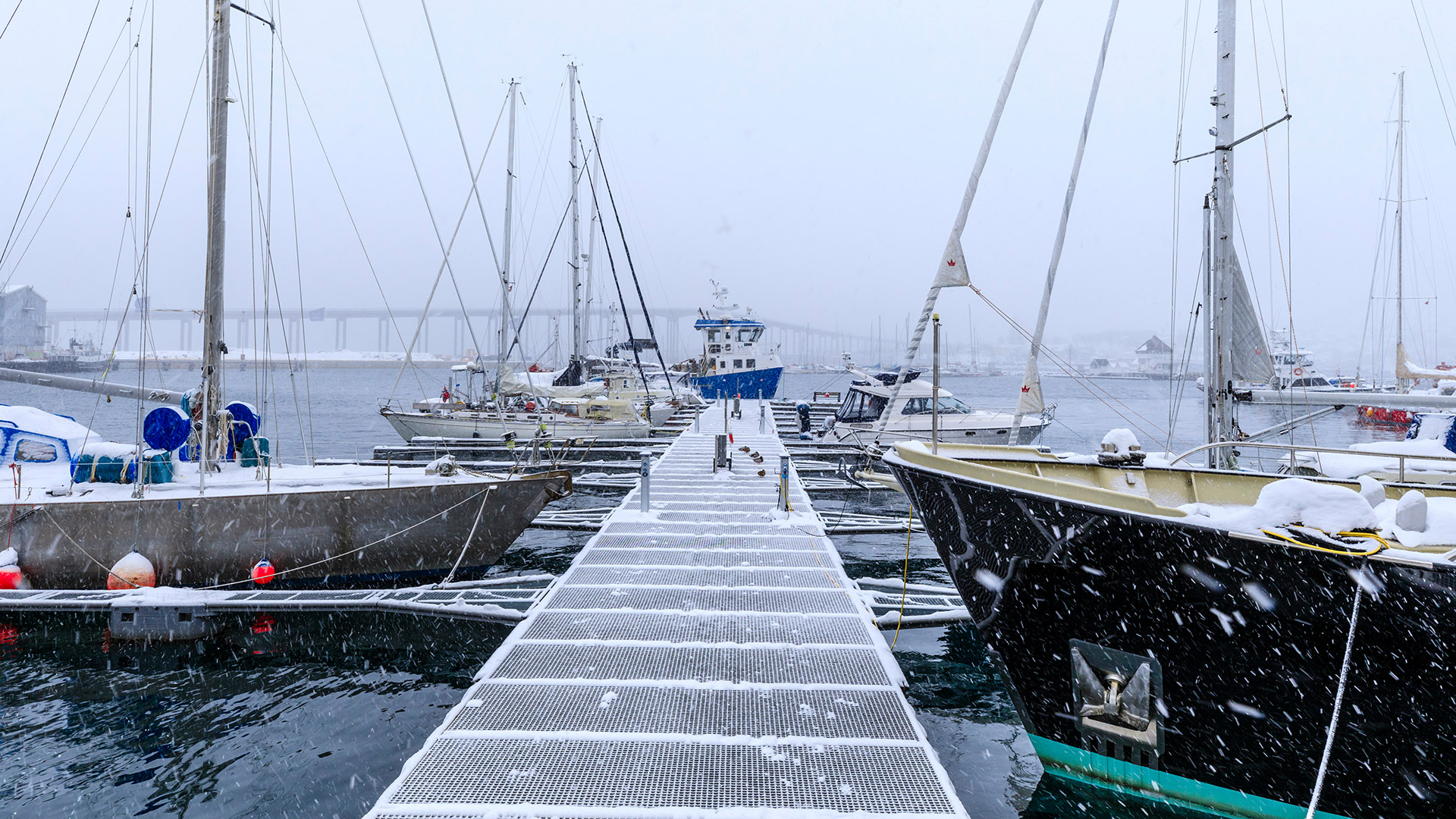 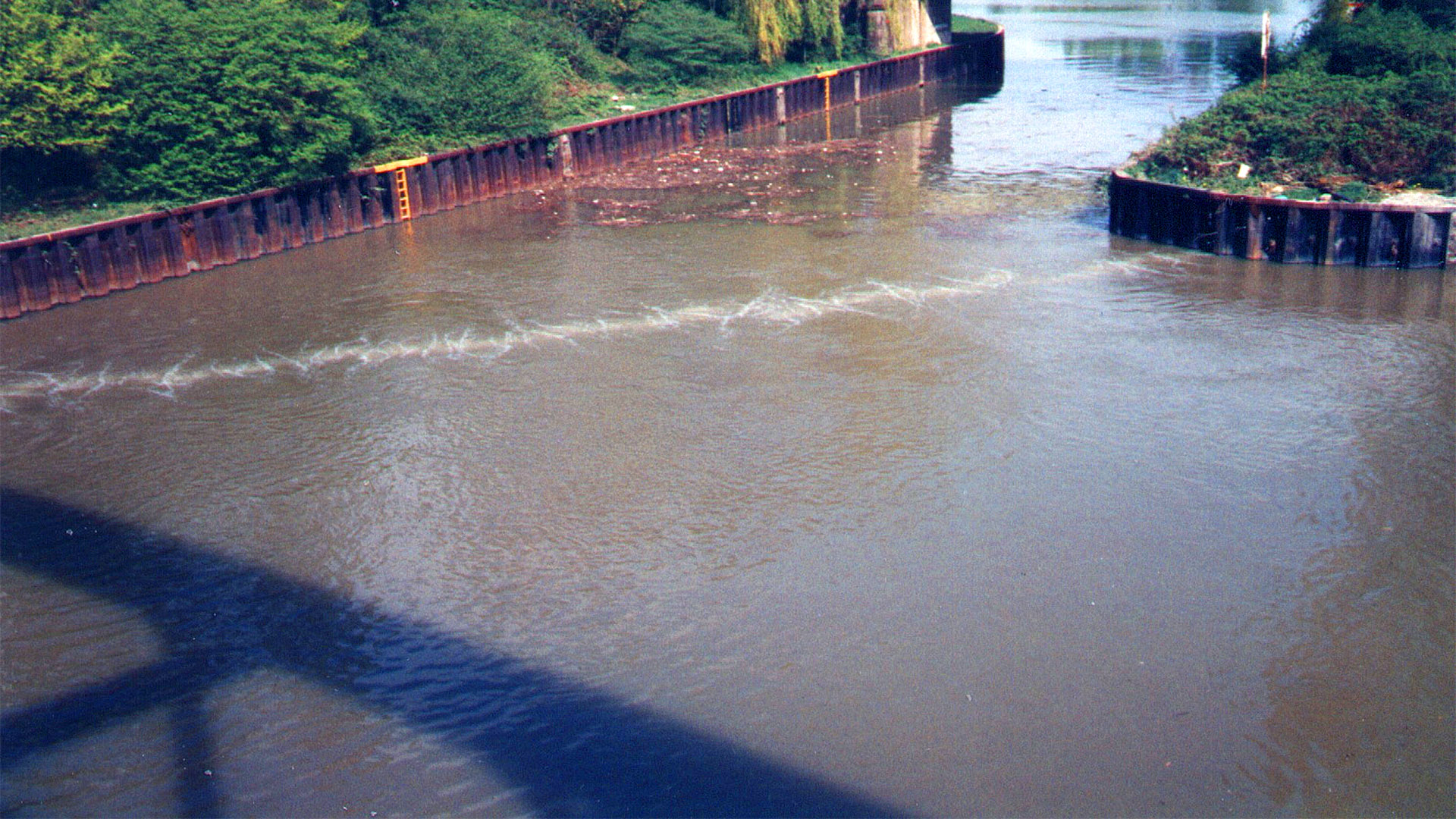 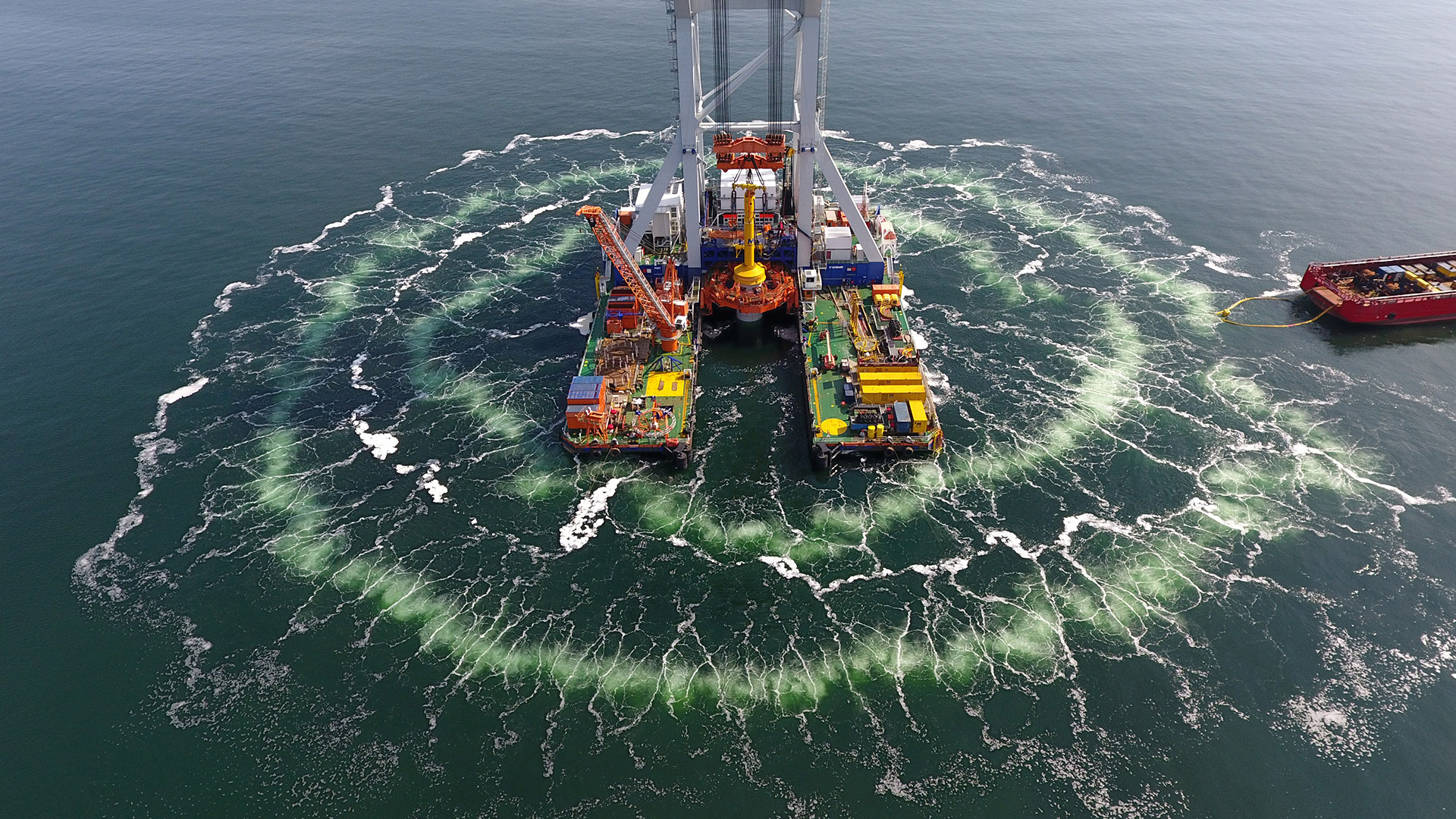 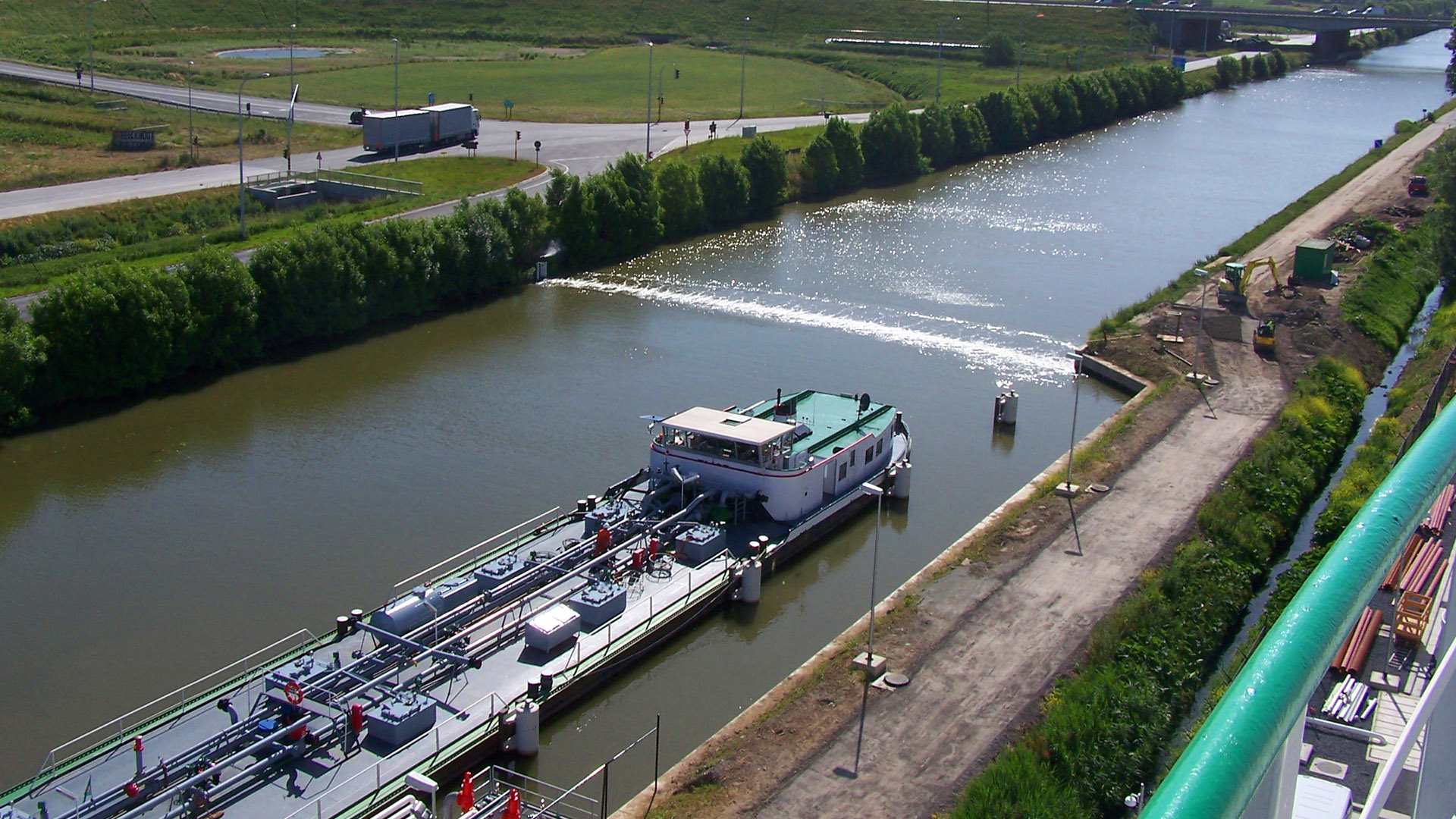 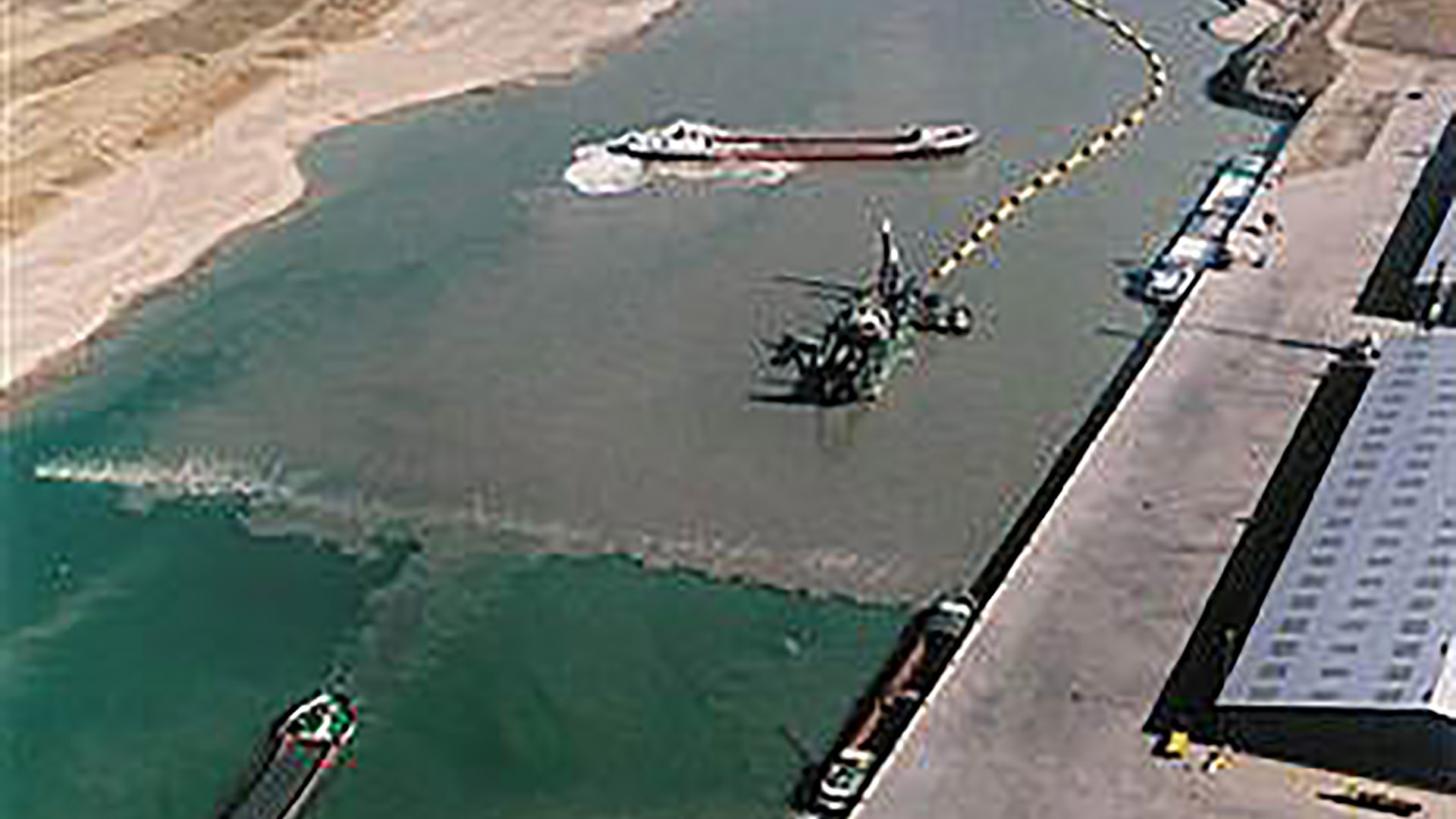